Haven't done a review for a while, but these figs are so nice I thought others would like to see them if they don't already know about them, they are not new, but the first time I have bought them, I paid full price for these figs and was not asked to review them.
I actually bought these for a Conquistador based fantasy war band/adventurer team, for settings like Mordheim and Frostgrave, so I will be converting them a little to fit.
They are available from Eureka Miniatures
Historical accuracy : Being a commission painter I have a pretty good all round knowledge, and have very good knowledge in some periods, unfortunately the renascence is not my best period, I would have to do a study to give an accurate review in this area, all I can say is that they look right to me, accuracy will not be a problem for me as they will be used in a fantasy setting.
Proportions : I have pictured them alongside an old GW knight, a Perry plastic knight, and a newer GW plastic Imperial figure, they fit well with them all, they are sized somewhere between the Perry and newer GW fig, not quite as hefty as the GW fig though, but I would have no problem mixing them with any of these makes, anatomically they look correct to me, nice limb proportions, nothing looks out of place.
Sculpting : these are really nice, I'm quite impressed, very natural looking, nice delicate details, when I finish my current project, I'm looking forward to getting into these.
Poses : All nice and natural, nothing over the top, if you were going to do muti basing they look like they would rank up nicely, and theres enough "action" for individuality.
Equipment : everything is in proportion, no over the top GW weapons here, I asked for all helmeted figures in my order, which Nic at Eureka as usual, filled my order as directed, there are figures with soft caps/hats available in the range, and different weapons, also mounted figs (which I didnt need for this project) plenty of poses to, lots of variety, theres also a nice range of Portuguese figures, they are very similar, but a little less flamboyant, a little more scruffy, nice though. The dogs and handler are a nice addition to my band to, like those.
Customer service : Everything arrived safe and as I asked for, (postage was within country) Eureka Miniatures are great, I have never had an issue with them, price is pretty good to.
Almost forgot, I ordered a female empire looking figure as well from laughing Monk miniatures sold by Eureka Miniatures, found Here its advertised as 32mm which seems about right, (bottom pic) looks like it would fit in well with GW, is a pretty nice fig, it cost double that of the Eureka ones, but a quarter that of a GW character figure and just as nice I feel, nice natural pose, nicely sculpted, I will pic up a couple more of these Laughing monk figs as characters. 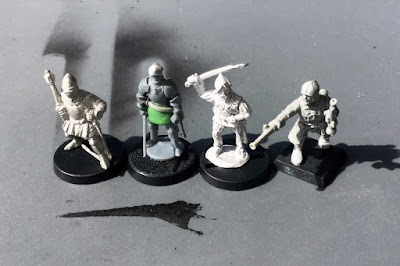 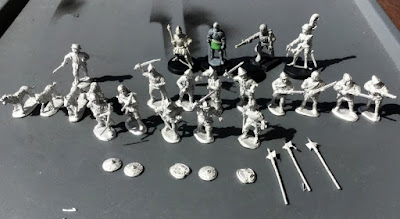 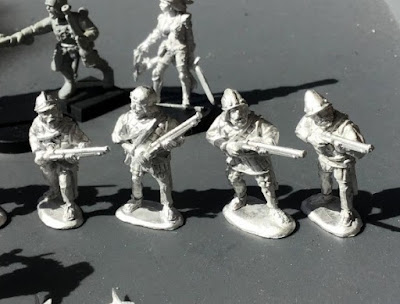 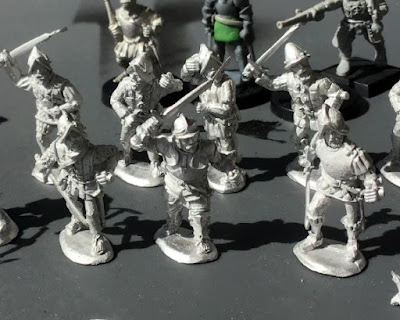 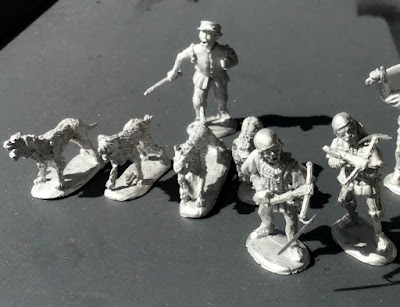 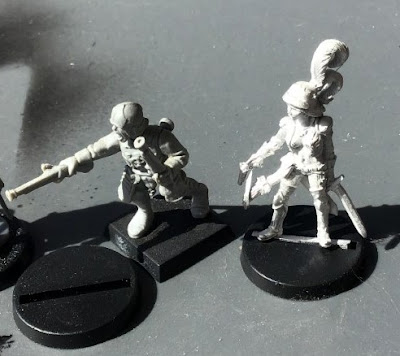