Hi guys
I have just finished my second WWI fighter plane model and decided I would write a build review, this may be helpful for others who are starting out in this area of interest, be aware when reading this that my knowledge of models until now is pretty extensive but concentrated on WWII armor, I have only built a couple of WWII aircraft 20 odd years ago as a kid and I have never written a review like this before.
To start off, I have Rodens 1/72 Fokker DVIIF (late) no.031 I chose Herman Goering's ride as its the only WWI option.
the Good-The Kit
the Kit comes in a box made from very thin cardboard, and opens at the ends, it has a nice picture of Herman Goering's white plane on the front, and a little portrait of Herman in the top left (this is handy as I built his ride so may use this picture on the mounting base)on the back it has painting and decal options for his plane. inside are 4 sprues of lite grey plastic with 61 parts but you only use 47 of these, so there will be some for the spare parts box. the parts are nicely moulded, nice detail with some flash. There is a 4 page instruction leaflet with pretty clear instructions, and 1 decal sheet with 5 decal options- Herman Goering white ride, Lithuanian 1920s in silver,Netherlands 1920s in Olive drab, Red army 1922 in olive drab, and a Ukrainian 1919 in US dark green, I'm impressed so far.
The bad-The build
My first WWI fighter kit was Revels Fokker DrI which went together pretty well with little fuss,this kit however did not go together so well, the 2 fuselage halves did not meet well and required a bit of putty on the underside, the bottom wing comes as one piece, this does not fit, it needs to be cut in the middle and leaves a 2mm wide whole in the undercarriage which needs filling, the engine didn't fit in the space provided and required a lot of trimming and cutting to get it in, the top wing was a bit of a nightmare to attach, all the struts closest the fuselage didn't line up with the locating holes, all locating holes need drilling out for any of the lugs to fit. The instructions have no mention of the guideline placement. I used stretched sprue for the guidelines. It was a little labour intensive to construct but I often like a challenging model.
the ugly-The painting
I painted the pilot(he was a converted Revel pilot)cockpit, engine and undercoated the exterior of the fuselage before assembly, I completed the assembly only leaving the prop and guns separate, covered the cockpit/pilot and exposed engine with bluetac then undercoated the whole plane white, I hand brushed the white base coat with GW acrylic and painted the details with Vallejo paints. Sprayed the whole model with a gloss coat and left to dry. The decals are nice, in register and very thin, I did have some problems with the decals breaking while applying but overcame this with patience, another gloss coat to seal the decals then onto the weathering, this is where my previous experience with WWII modelling became a negative, I tried to keep the weathering very light but on a white plane it still came out over done (not a problem with armor, as tanks drive around in mud and dust all day) The Prop was painted with Vallejo desert sand, wood grain was added with a dark brown and the whole thing given a coat of vallejo wood grain, a final dull coat spray and the separate parts assembled, I have yet to find some clear mounting stands so have bluetaced the plane to a pencil for the photo's.
Conclusion
Even though the kit had a few problems in the build, it makes a nice representation of a Fokker DVIIF, its not a kit to give to a kid/inexperienced modeller just starting in the hobby, but experienced modellers will work through the problems, recommended for experienced modellers interested in WWI aviation. 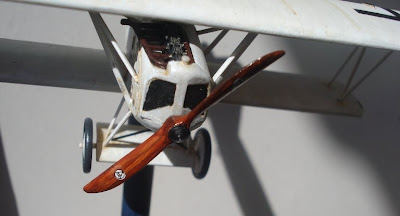 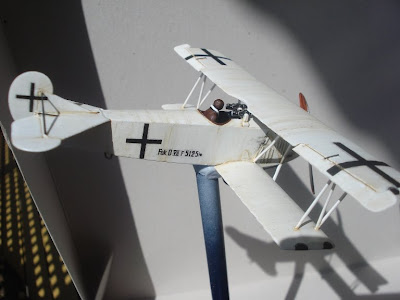 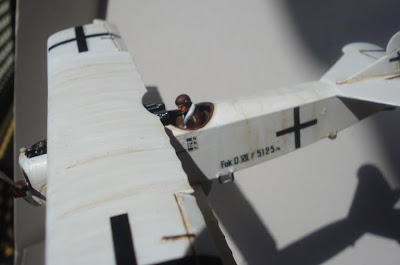 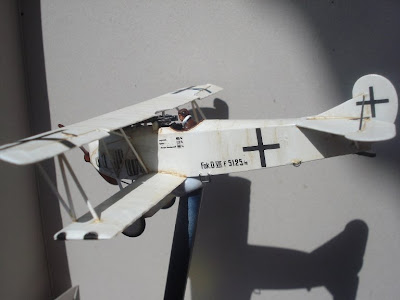 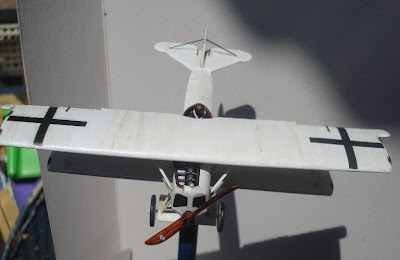 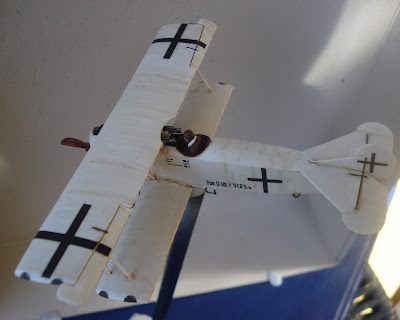